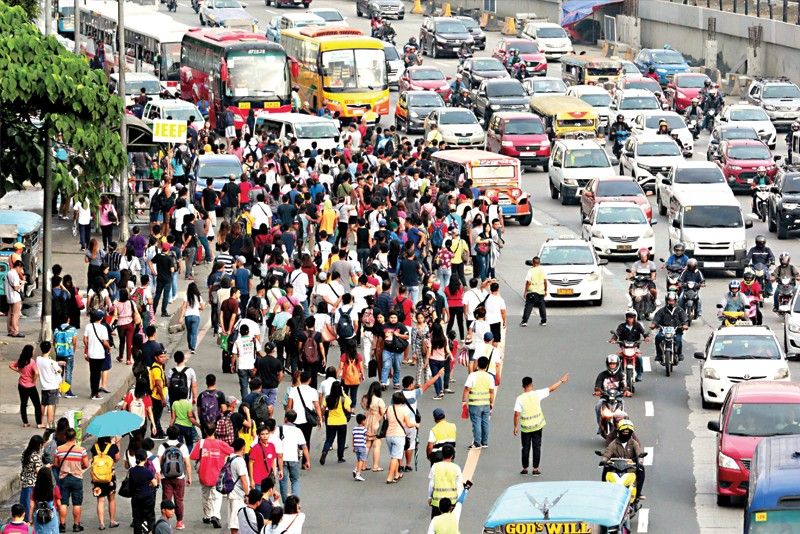 MANILA, Philippines — Transportation Secretary Arthur Tugade said the Duterte administration is bent on modernizing the country’s public transport and the government will push through with the replacement of old jeepneys and other public utility vehicles (PUVs) despite protests from various groups.

“Past administrations wanted to modernize transportation, but every time people wave flags saying that the program is anti-poor, they take a step back. This has to stop,” Tugade said.

While the government will not stop anyone from expressing their rights, Tugade reminded those against the modernization program to not step on other people’s rights and consider the common good.

“Break that and I will fight you. Modernization should be implemented now,” he said.

The Department of Transportation (DOTr) has been reiterating its plan to continue pushing for a safe, convenient, environment-friendly and modernized transportation system in the country.

Under the government’s PUV modernization program launched in 2017, old jeepney units are required to be replaced with modern PUVs that are powered by either brand-new Euro 4 compliant diesel engines or electric motors.

The program is part of efforts to provide a safer transport system for commuters, while mitigating the effects of climate change.

Land Transportation Franchising and Regulatory Board (LTFRB) chairman Martin Delgra said that the government is firm on the directive of President Duterte to implement the PUV modernization to ensure safe and convenient transport system for commuters.

He warned that PUV drivers could also have their licenses suspended or revoked by the Land Transportation Office (LTO) if they participate in the protest action.

In line with this, he announced that a total of 25 franchises have been cancelled by the regulatory board over their participation in 2017 and last year’s transport strikes.

Certificates of public convenience of PUV operators and drivers who took part in the transport strikes were cancelled for violation of their franchises, as mandated by an LTFRB memorandum, said Delgra.

The end of the transition period is set by the government on July 2020, but Delgra said the modernization program will still continue after that.

The program has garnered opposition over two of its components – the consolidation of operators into cooperatives and fleet modernization.

Delgra said they hope to replace about 80 percent of the over 170,000 jeepney units aged 15 years and older before Duterte steps down from office in 2022.

By July 1, 2020, LTFRB assured the commuting public that they would no longer see outdated and polluting jeepneys plying the streets.

Jeepney drivers and operators are protesting the government’s PUV modernization program and yet, lawmakers are setting aside at least P25 billion to help them acquire new units.

The money will be taken from all other vehicle owners in the form of a 300-percent increase in the road user tax, officially called motor vehicle user’s charge (MVUC) under the present law.

After a hearing yesterday morning, the House of Representatives committee on ways and means agreed in principle to endorse the enormous hike in the road levy, which the LTO collects from more than 11 million vehicle owners.

“The subsidy fund for the PUV modernization program will be taken from the MVUC increase,” Albay Rep. Joey Salceda, one of the authors of bills seeking the adjustment, told reporters after the hearing.

He said each jeepney owner would get a P500,000 subsidy for every unit he owns.

“We will start with single-unit owners. If the operator has several units, the prioritization will be by age. The older units will get priority because those are the most inefficient,” he said.

He cited studies showing that the distance traveled by old jeepneys on a liter of diesel is only two kilometers, while pick-up trucks could run up to 12-14 kilometers on that amount of fuel.

Representatives of several agencies, including the Department of Health (DOH), Philippine Health Insurance Corp. (PhilHealth), DOTr, LTO and LTFRB supported the proposal to increase the MVUC.

Salceda said the plan is to allocate a large portion of the MVUC hike to the universal health care program, whose principal implementers will be DOH and PhilHealth.

But Deputy Speaker Luis Raymund Villafuerte said PhilHealth has enough funds and should first be made to answer for anomalies like bogus and fraudulent payments for claims, which he claimed have deprived the agency of P154 billion.

“Let us not give them additional funds unless they plug loopholes that result in fund wastage,” he said.

Last Sept. 11, Salceda told reporters that he would not adopt the Department of Finance (DOF) proposal for a big increase in MVUC rates.

“If we adopt it, we will have 11 million more enemies,” he said, referring to the number of vehicle owners paying the tax.

Motorcycles with engine displacement of up to 400 cc will be exempt from paying MVUC. At present, they are levied P120 if without a sidecar and P150 if with a sidecar.

Levies on other vehicles like trucks will likewise increase by at least 300 percent.

In a related development, the House committee on Metro Manila development asked concerned agencies to study and submit reports on a proposal to ban private cars on EDSA from 6 to 9 in the morning and 6 to 9 in the evening.

Some senators have described the proposal of Caloocan Rep. Edgar Erice as “crazy.” – With Jess Diaz, Romina Cabrera