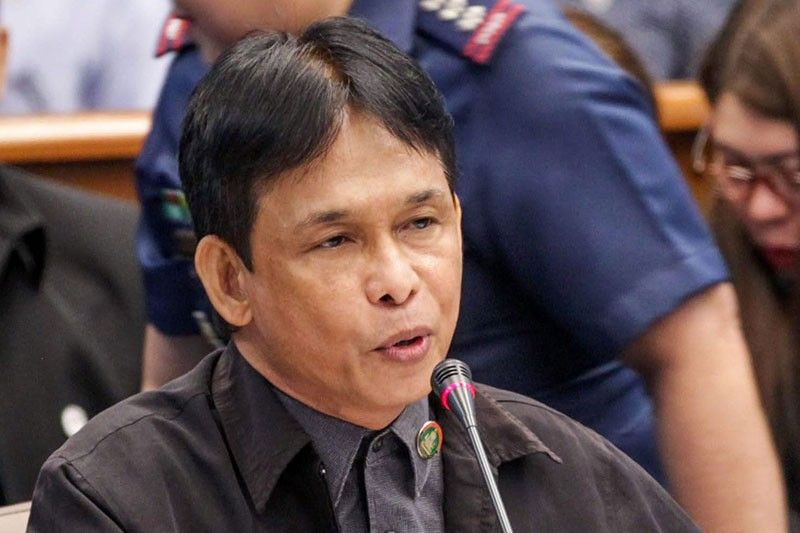 MANILA, Philippines — With the Philippine National Police embroiled in a drug scandal, the PNP Internal Affairs Service wants the investigating agency to be separated from the police force to give the IAS more authority to prosecute police scalawags.

To avoid duplication of work, Triambulo wants the powers of the National Police Commission (Napolcom) clipped, reducing it to a policymaking body or administrator of the PNP.

The IAS will then be tasked to conduct inspection and audit of the performance of the police force.

The Napolcom is an attached agency of the Department of the Interior and Local Government (DILG), which has administrative control over the PNP.

Triambulo noted that IAS counterparts in the United Kingdom are feared by police scalawags as they are independent from the police organization.

Triambulo told reporters in Camp Crame, Quezon City that in other countries, the recommendation of the board can lead to police chiefs being relieved.

Under the current setup, the IAS is a unit directly under the supervision of the office of the chief PNP, which means that all their recommendations are subject to an automatic review and approval by the country’s top cop.

The IAS also lacks the power to protect witnesses against corrupt police officers as it only handles administrative cases and not criminal complaints.

Triambulo also lamented the change in the setup under PNP chief Gen. Oscar Albayalde, who stepped down from his post amid allegations he protected ninja cops or police officers involved in drug recycling, who were once under his command when he was Pampanga police director in 2013.

According to Triambulo, Albayalde issued a memorandum that all their resolutions will be passed to the PNP Directorate for Personnel and Records Management (DPRM) for review.

The situation was different under former PNP chief and now Sen. Ronald dela Rosa, who would automatically approve his resolutions for implementation.

During Albayalde’s tenure, Triambulo said only 30 percent of their resolutions on administrative cases were implemented.

The IAS chief also disclosed that there was an apparent whitewash in the investigation of the 13 ninja cops accused of recycling and selling illegal drugs seized during a raid in Mexico, Pampanga in 2013.

Triambulo said that based on the recent Senate Blue Ribbon committee’s public hearings on the ninja cops, there appears to be a cover-up.

He refused to elaborate on his assessment, citing technicalities, but said IAS will file new administrative charges against the 13 lawmen who have been placed on floating status.

The cases could include irregularities in the performance of duties and may be filed next week once they obtain the transcripts of testimonies at the Senate hearings on the controversial drug raid.

The Department of Justice (DOJ) conducted yesterday the initial preliminary hearing on the reinvestigation of ninja cops who allegedly sold illegal drugs estimated to be worth P650 million during the Pampanga operation.

Police Maj. Rodney Baloyo IV, the team leader of Pampanga drug enforcement unit that conducted the raid, and M/Sgt. Ronald Santos were not able to attend the preliminary hearing at the DOJ in Manila.

DOJ panel head Senior Associate State Prosecutor Alexander Suarez said they sent a letter to Senate President Vicente Sotto III requesting that Baloyo, who has been cited in contempt by the Senate and is now detained at the New Bilibid Prison (NBP), be allowed to attend the hearing.

Suarez said the Senate was reportedly not able to act on their request because of short notice.

The DOJ panel of prosecutors only sent out last Oct. 9 the copies of the subpoena for the 13 policemen to attend the hearing.

In the case of Santos, the police failed to find the policeman in his two registered addresses in Barangay Sta. Cruz, Porac, Pampanga.

Central Luzon police director Brig. Gen. Joel Coronel said Santos could not be located in his two residences and the police officer was last seen in one of his houses in June 2017.

Coronel said agents of the police Criminal Investigation and Detection group (CIDG) and the National Bureau of Investigation were ordered to track down Santos.

The CIDG had earlier investigated the operation conducted by Baloyo and the other Pampanga policemen who allegedly “recycled” or sold 160 kilos of shabu worth P650 million that were seized during a raid in Mexico, Pampanga on Nov. 29, 2013.

The CIDG was prompted to investigate the 13 policemen after receiving reports that the Pampanga police officers had all purchased new sport utility vehicles.

Baguio City Mayor Benjamin Magalong, former CIDG chief who investigated the Pampanga policemen, had accused Albayalde of protecting the policemen implicated in the raid and intervened to change their dismissal order to demotion.

Albayalde was the Pampanga police director when Baloyo and his men seized the drugs in 2013.

The controversy has forced Albayalde to step down as PNP chief and President Duterte has since appointed Lt. Gen. Archie Francis Gamboa as PNP officer-in-charge.

Albayalde will officially retire from the service on Nov. 8.

Suarez said the reinvestigation of their case would focus on the alleged violation of Republic Act 9165 or the Comprehensive Dangerous Drugs Act of 2002, particularly Sections 27 (misappropriation), 29 (planting) and 32 (custody and disposition) that were dismissed in 2017.

Suarez said they asked the DOJ panel for copies of the transcript of stenographic records of the Senate Blue Ribbon committee that conducted a hearing on the ninja cops last Oct. 1, 3 and 9.

CIDG counsel Lt. Col. Joseph Orsos said securing a copy of the Senate’s transcript was important because “many revelations” could be gleaned from it.

“There is really no direct evidence that the bribe happened or there was this much unaccounted shabu,” he said.

Lawyer Donnie Ray Muli, counsel of alleged ninja cops Tinio, Valeroso and Lacsamana, said they have no intention of submitting additional evidence and would just wait for the CIDG to file their pleading and make the necessary comment.

Sen. Richard Gordon yesterday asked the DOJ to extend protection to secure the testimonies of three policemen who are witnesses to the alleged kidnapping of a suspected drug trafficker in Mexico, Pampanga in 2013 by the 13 alleged ninja cops.

Gordon, chairman of the Blue Ribbon panel, said the DOJ should provide security to S/Sgts. Jerome Bugarin, Marlon dela Cruz and Jackson Mariano, who are reportedly receiving death threats over their knowledge of the alleged kidnapping of Johnson Lee by police officers led by Baloyo.

“I just talked with (Justice) Secretary Meynard (Guevarra) and I’ll follow up with a letter. The policemen really need protection and I want their testimonies perpetuated. They (DOJ) will go to the court with affidavits in which case if something happens, hopefully not, that will be admissible in court,” the senator told reporters.

Bugarin, Dela Cruz and Mariano, all assigned to the Mexico police station, responded to a call from barangay officials in the morning of Nov. 29, 2013 to help Lee, who sought the help of village officials.

The policemen turned over Lee to a nearby military detachment while they went to the suspect’s residence in Lakeshore Subdivision in Mexico to find out what happened.

The three police officers later found out that an anti-drug raid was ongoing at Lee’s house by a team led by Baloyo.

Baloyo told the police officers that Lee escaped. Baloyo instructed them to bring Lee to their custody.

Later in the day, however, Baloyo presented another suspect, identified as Ding Wengkum, to the media in announcing the results of the raid.

An internal investigation of the PNP shortly after the raid discovered that Baloyo and his group kidnapped Lee and later released him after the suspected paid the arresting officers P50 million.

Justice Secretary Guevarra yesterday said the PNP-CIDG should secure the policemen and barangay officials from Pampanga who could stand as witnesses in the reinvestigation of the 13 ninja cops.

“In the context of the DOJ reinvestigation on the so-called ‘ninja cops’ involved in the Pampanga raid in 2013, the proper party to file such a petition at this time is the complainant PNP-CIDG,” Guevarra said.

The Senate Blue Ribbon committee has yet to conclude its investigation into ninja cops and the Good Conduct Time Allowance (GCTA) law scam involving prisoners allowed to avail themselves of early release for good behavior.

Meanwhile, IAS said there was an earlier resolution ordering the dismissal of four of the ninja cops again involved in another irregularity during an anti-drug operation when they were assigned to Antipolo City in Rizal.

Triambulo said the order was never implemented and the lawmen were just demoted and later reassigned to other units.

No more tax reforms to make it out of 17th Congress