AS trade tensions between the United States and China intensify, local economists believe the Philippines may not emerge unscathed from the trade tiff without any policy reforms.

As both countries are major trade partners of the Philippines, Ateneo EagleWatch Senior Fellow Leonardo A. Lanzona Jr. warned this could negatively affect the country’s trade prospects moving forward.

“Since the US and China are our major trade partners, this will negatively affect our trade,” Lanzona told the BusinessMirror. “To counteract these forces, we need to diversify our export products and also our destinations.”

Lanzona said this will first negatively affect the manufacturing sector growth, which has already “recorded lower growth this first quarter of the year.”

The country’s Volume of Product has been posting contractions since December 2018 at 8.9 percent after posting growth of as high as 21 percent in April 2018. In 2019, the VoPI continued to contract to 9.2 percent in March from contractions of 8.1 percent in February and 2.5 percent in January.

Lanzona said the country needs to upgrade its skills and encourage the use of new technologies to produce nontraditional exports. It would also be useful for the country to pursue new trade agreements, particularly Europe, he added.

“The goal is simply to know the needs of our other trade partners and develop production activities that can be incorporated in international value chains. This can be achieved by improving our governance and regulatory systems to develop capital inflows and increase labor demand,” Lanzona said.

Philippine Institute for Development Studies (PIDS) Senior Research Fellow Roehlano M. Briones said higher tariffs on China will favor the Philippines only if the country’s exports to the US will be able to compete with China’s exports. However, Briones said there are only a few of these products.

With or without trade row

Action for Economic Reform (AER) Coordinator Filomeno S. Sta. Ana III told the BusinessMirror reforms should be given priority, and not only because of the trade tension between China and the US.

The country has been recording lackluster export performance. In the January-to-March period, based on Philippine Statistics Authority (PSA) data, exports contracted 3.1 percent to $16.38 billion.

Sta. Ana said the country is still producing low value-added exports, which is making it less competitive in the international market. He said there has to be an “overhaul of fiscal incentives” and efforts to pursue a new industrial policy that gives premium to finished products.

“The trade war between China and the US can even be an opportunity for us to steal markets and investments, but we have to act soonest in pursuing the necessary reforms, underpinned by industrial policy, competitive exchange rate, fiscal incentive rationalization, dismantling of sugar monopoly, agricultural modernization,” Sta. Ana said.

Meanwhile, National Economic and Development Authority (Neda) Undersecretary for Planning and Policy Rosemarie G. Edillon told the BusinessMirror that the government is closely monitoring the developments on the trade tensions.

Edillon said the impact on the Philippine economy will be from the slowdown in China’s economy. However, she said China remained confident that its economy can withstand these pressures.

“The impact on us will come by way of an economic slowdown in China. Remember that we enjoy a good relationship with both US and China. China maintains that it can withstand this shock. It all depends on how quickly it can develop trade partnerships with other countries,” Edillon said.

Last week, the Asean+3 Macroeconomic Research Office (Amro) said if the United States and China fail to resolve the trade tensions between them, the Philippine economy stands to lose 0.10 percentage points in real GDP growth this year and next year.

In its Asean+3 Regional Economic Outlook (Areo) 2019 report, Amro said this failure in resolving the trade tensions will lead the US to impose a 25- percent tariff on all its imports from China and vice versa.

Based on data from the PSA, the US and China are among the country’s top trade partners. In the January-to- March period, the US emerged as the country’s top export destination while China was the top import source.

Over the long term, Amro said the trade tensions could increase exports, particularly in the electronics and machinery as well as apparel sector in other countries in the region.

Countries like Singapore, Malaysia and Thailand will benefit from a production shift in electronics and machinery while Vietnam and Cambodia will see a pick up in apparel exports. 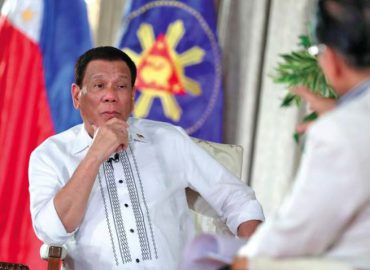