THE government and exporters are in agreement export figures this year will end in the black, but the growth rate could settle between 2 percent and 3 percent due to the global slowdown in demand for Philippine-made items.

Exporters are historically upbeat that orders will pick up starting October, as clients begin to buy in larger volumes to beef up their stocks in time for the Christmas season.

“Exports are really increasing the last few months. We expect to see it some more after a long decline. However, it’s not something that we can really say will happen because of the volatility of the international situation,” Ortiz-Luis told the BusinessMirror.

“We think it will increase. However, results will be different if this trade war worsens because it is hitting our products,” he added.

Shipments from January to July recorded flat growth at $40.39 billion, from $40.36 billion during the same period last year, according to data from the Philippine Statistics Authority (PSA).

PSA data also showed exports have been increasing for four consecutive months already, from April to July, to recover from a slow start in the first quarter. Electronic products, the country’s top export, rose a little over 1 percent to $22.37 billion, from $22.13 billion, during the seven-month period—within the industry’s target of up to 3 percent.

“The most at risk in this trade war is our semiconductor [products] because orders and imports from major markets where we get our supplies and where we supply weaken,” Ortiz-Luis said.

The industry leader conceded the export sector’s target of a 6-percent growth this year “will be an uphill climb,” but said a positive year-end result will suffice. He pinned his hope on the services sector to deliver the much-needed boost to exports, as well as some projected uptick from garments on increased demand for clothing during the holidays.

Shipments of garment products from January to July declined 4.38 percent to $541.87 million, from $566.75 million during the same period last year, per PSA data.

Similar to the private sector’s projections, the government is expecting exports to finish on a positive note this year. Trade Secretary Ramon M. Lopez said, however, figures will most likely be on the lower single-digit level due to slower global trade resulting from the trade conflict.

“Export outlook is moderately positive, [from] 2 percent to 3 percent, due to generally slower world demand [for merchandise goods],” Lopez said in a text message.

Last Tuesday, World Trade Organization (WTO) economists downgraded their forecasts for trade growth this year and next year. With the adjustment, global merchandise trade volumes are now expected to grow by just 1.2 percent in 2019, lower than the earlier forecast of 2.6 percent in April, and by 2.7 percent in 2020, down from the previous 3 percent.

“The darkening outlook for trade is discouraging but not unexpected. Beyond their direct effects, trade conflicts heighten uncertainty, which is leading some businesses to delay the productivity enhancing investments that are essential to raising living standards,” Azevedo said in a statement.

“Job creation may also be hampered as firms employ fewer workers to produce goods and services for export,” he added. 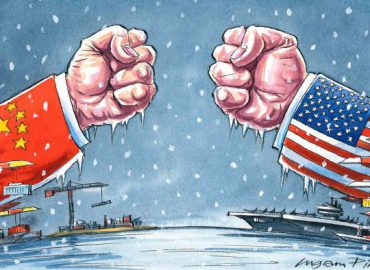 ‘PHL not a priority for trade-row victims’