The survey conducted from December 16-19, 2018 found that 87 percent of Filipinos evaluated their life in general as “very/fairly happy.”

However, the SWS said that the “Happiness score” of 87 percent declined by 7 points from the record-high 94 percent in December 2017.

The “Happiness score” this period is the lowest in four years since the 85 percent in December 2014, the pollster added.

Meanwhile, the “Unhappiness score” is at 13 percent, the highest since the 15 percent in the same period in 2014. 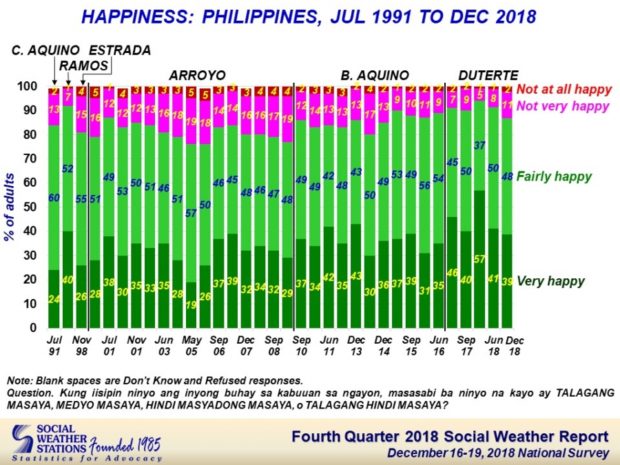 On the other hand, the survey showed that 82 percent of Filipinos are “very/fairly satisfied with the lives they lead,” the lowest since September 2014, which had the score of 79 percent.

The score of 82 percent, which the pollster tagged as the “Satisfaction with Life” score, is a 10-point drop from the record-high 92 percent in December 2017.

The “Dissatisfaction with Life” score, on the other hand, was at 18 percent in December 2018, the highest since the 21 percent in September 2014. 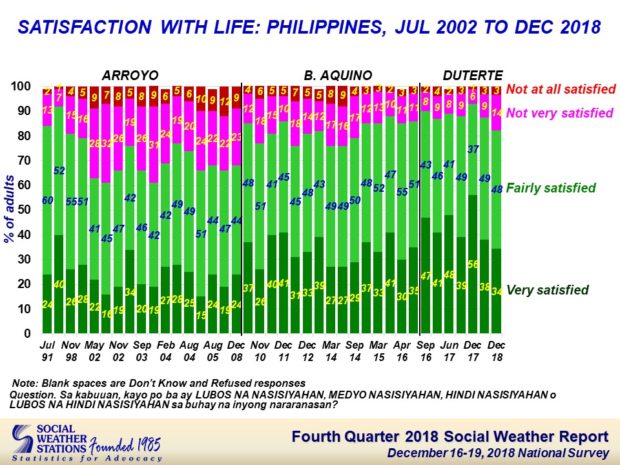 The survey was conducted using face-to-face interviews of 1,440 adults (18 years old and above) nationwide.

There were 360 respondents each in Balance Luzon, Metro Manila, the Visayas, and Mindanao.

The poll had sampling error margins of ±2.6 percent for national percentages, and ±5 percent  each for Balance Luzon, Metro Manila, the Visayas, and Mindanao.

(If you were to consider your life in general these days, how happy or unhappy would you say you are on the whole? Are you: Very happy; Fairly happy; Not very happy; or Not at all happy?)

Palace says it is ready to comply with FOI rules 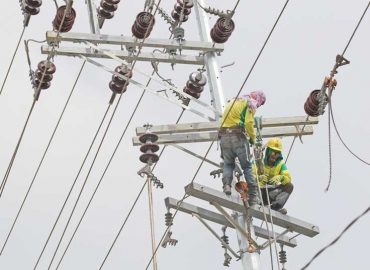