The Philippines may not be able to attain upper middle-income country (UMIC) status by the end of the year given the economy’s lackluster 5.6 percent performance in the first quarter and major headwinds that could dampen growth and incomes this year.

Socioeconomic Planning Secretary Ernesto M. Pernia made this pronouncement during the news briefing on the National Income Accounts on Thursday. Pernia said, however, that the National Economic and Development Authority (Neda) still needs to make the necessary computations, the country’s GDP growth prospects are not as rosy this year.

In the first quarter, the economy only grew 5.6 percent, slower than the 6.5 percent posted in the same period in 2018. The growth is also the slowest in 16 quarters, or since the first quarter of 2015 when growth was at 5.1 percent.

“That [reaching UMIC status this year] is now ‘iffy’ because to achieve upper middle-income country [status], we’re talking about GNI [gross national income], not GDP per capita. We’ll have to do some calculations if we can still reach $3,980 per capita by this year,” Pernia said.

Local economists such as Calixto Chikiamco said attaining UMIC status is really not in the cards for the Philippines this year or even in the next three to five years. He said it is important to note that economic growth under the Duterte administration has been declining.

Chikiamco said external headwinds such as the United States-China trade tensions, El Niño, high oil prices, and water shortage, could further complicate the country’s bid not only in terms of boosting economic growth this year but also the attainment of UMIC status.

He added that the agriculture and export sectors have also weakened and no amount of election spending this year will be able to help the country overcome this and other external headwinds.

“Economic growth under Duterte has been decelerating. His administration’s economic plan is too dependent on government action,” Chikiamco told the BusinessMirror on Thursday. “His BBB [Build, Build, Build] is [also] very short on accomplishments.” To address the situation, Chikiamco urged the President to “pivot back” to public-private partnerships (PPP) from official development assistance (ODA) and the General Appropriations Act or national budget.

What is difficult at this point, UnionBank Chief Economist Ruben Asuncion said, is the impact of slow economic growth on the country’s poor. He said slower growth would affect the country’s poverty-reduction targets.

The government aims to reduce poverty to 14 percent by 2022. In the first semester of 2018, the Philippine Statistics Authority (PSA) reported that the country’s poverty incidence rate slowed to 21 percent from 27 percent in the same period of 2015.

“Higher economic growth usually translates to lower poverty incidence especially with good targeted poverty-reduction policies. At the end of the unneeded and unnecessary delay in the passing of the 2019 national budget are real people waiting for government to enable and help them get out of vicious poverty,” Asuncion said.

Pernia said the impact of the delay in the passage of the 2019 national budget, which is already being blamed as the reason for the lackluster economic growth performance in the first quarter, is one of the many external headwinds to be faced by the economy this year.

The President’s economic team said in a joint statement that were it not for the delay in the passage of the budget, the country’s GDP growth in the first would have been at least one percentage point higher.

Comparing the 2018 and 2019 first-quarter performance of the government, Government Final Consumption Expenditure weakened, growing only by 7.4 percent versus 13.6 percent in 2018.

Public construction contracted by 8.6 percent. This, the economic team said, affected projects such as the Department of Education’s repair and rehabilitation of school buildings.

“To reach the full-year growth target of 6 to 7 percent, the economy will need to expand by an average of 6.1 percent over the next three quarters. This target is still within reach, should the private sector sustain its current performance and the government be able to jump-start and speed up the implementation of its new programs and projects,” the economic team said in a joint statement.

Net Primary Income from the rest of the world grew by 1.9 percent, resulting in the 4.9-percent growth of Gross National Income. 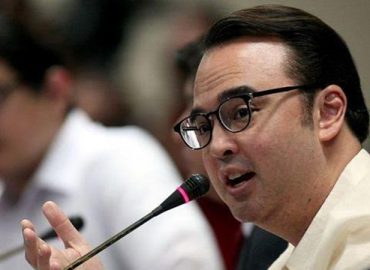 ‘No excuses’ for not completing 2020 budget, Cayetano says