Could it be the end for oil smugglers when the government—long affected by massive revenue losses—begins to inject fuel markers on all imported and refined petroleum products starting next month?

Finance Assistant Secretary Antonio Joselito Lambino II said on Wednesday the fuel marking program to be implemented by the Department of Finance (DOF), Bureau of Customs (BoC) and Bureau of Internal Revenue (BIR) would pave the way for the arrest of “fuel smugglers.”

“For those who are smuggling or thinking of smuggling fuel, please know we will implement the fuel marking program vigorously,” Lambino said in a Palace briefing.

Under the program, molecular tracers or fuel markers will be injected into gasoline, diesel and kerosene.

The fuel marking program to be fully rolled out starting March will ensure that the government will be able to collect the correct excise taxes from 15.2 billion liters of fuel products sold in the country, according to DOF officials.

BOC Deputy Commissioner Teddy Sandy S. Raval told finance reporters that for this year, about 6.8 billion liters of imported diesel, gas and kerosene would be covered by fuel marking.

As for the oil in Petron and Shell’s refineries in Bataan and Batangas, respectively, the volume to be marked would reach 8.4 billion liters, BIR chief revenue officer IV Danilo T. Pasiliao said.

Raval said the implementing rules and regulations (IRR) for the fuel marking system to be implemented under the Tax Reform for Acceleration and Inclusion (TRAIN) Act was “almost done.”

While the results of the Department of Energy’s (DOE) fuel marker testing have yet to be released, DOF director Emee Macabales said the program could already be implemented as it was earlier found that there was “no recognizable pattern that affects the marker.”

“SICPA has given their own certification for the fuel marker, which met the minimum standards,” Macabales said.

The joint venture of SGS Philippines Inc. and Switzerland-based SICPA SA will implement fuel marking in the country, having earlier bagged a five-year contract.

The two companies will establish and operate a fuel marking system that will supply and inject fuel marker in all taxable oil products, except Jet A-1, Avgas, crude oil and LPG. The venture will also implement and manage a fuel testing program, including fuel analysis and data management nationwide. The contract also requires that the group will transfer the technological know-how to employees of the BOC and the Bureau of Internal Revenue (BIR).

SICPA and SGS executives assured the markers imported from Switzerland would not be faked as they had a unique formulation for the Philippines.

According to the DOF’s earlier estimates, revenue losses due to oil smuggling and misdeclaration reached P26.9 billion in 2016, almost half of the actual P52.6 billion excise and value-added taxes collected by the BOC and the BIR that year.

The Manila-based Asian Development Bank had a higher estimate of P37.5 billion in foregone tax revenues yearly from oil smuggling, while another study commissioned by the domestic oil industry pegged losses at P43.8 billion annually. 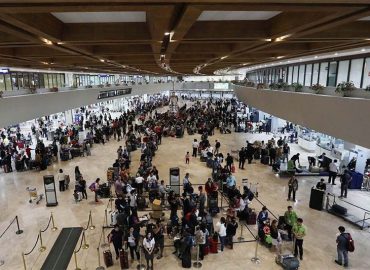