PRESIDENT Rodrigo R. Duterte may issue an executive order (EO) to address inflation by removing “administrative constraints and non-tariff barriers” on the import of basic goods.

In a briefing at the Palace on Wednesday, Spokesperson Herminio L. Roque, Jr. said that one of the agenda items at the Tuesday Cabinet meeting evening was measures to address food inflation.

“The Economic Cluster Group will submit to the Office of the President (OP) a draft executive order removing administrative constraints and non-tariff barriers on importation of fish, rice, sugar, meat and vegetables,” Mr. Roque said. “They will simplify the process for importing food products,” he added.

He said that “2.7 million sacks will be allocated to ZAMBASULTA — Zamboanga, Basilan, Sulu and Tawi-Tawi,” adding that the government is “also projecting a harvest for 2018 amounting to 12.6 million metric tons or around 252 million sacks of rice.”

“Another 5 million sacks of rice will be imported early next year,” Mr. Roque added.

Mr. Roque added that one of the goals “is to simplify and streamline the licensing procedures for rice imports of the (National Food Authority).”

Mr. Roque said “monitoring teams” will be formed to track rice from ports to NFA warehouses and outlets.” He added that the executive department is also “urging the Senate to immediately pass the Rice Tariffication Bill within the month.”

The Rice Tariffication Bill or the Revised Agricultural Tariffication Act that the House of Representatives approved last month hopes to liberalize private imports of rice, which will be charged tariffs, proceeds of which will help fund measures to make domestic rice growers more competitive.

They also agreed to facilitate the distribution of imported fish to wet markets and form teams consisting of law enforcers and farmers groups to monitor the transport of rice from ports to NFA warehouses to retail outlets. The DA was on notice to seek out more cold storage facilities for chicken and, with DTI, put up outlets where producers can sell directly to the public. The Bureau of Customs was directed to “prioritize the release of essential food items in the ports.”

According to Mr. Roque, Tuesday’s Cabinet meeting also discussed the report of the interagency committee on Boracay rehabilitation, particularly on the carrying capacity of Boracay island.

“Some of the recommendations which were adopted yesterday include: maintaining the tourism carrying capacity of 19,215 persons per day and 6,405 tourist arrivals per day,” he said. — Arjay L. Balinbin 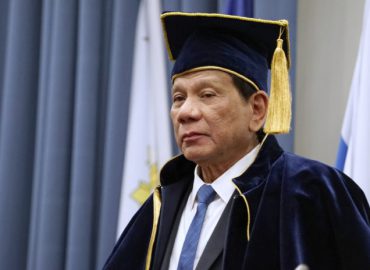 Teachers to get pay hike before yearend – Duterte

Palace: No risk of weaker fiscal position with federalism shift