THE House of Representatives on Monday said it will withdraw the copy of the enrolled 2019 General Appropriations Act (GAA) that it earlier sent to the Senate for signature.

San Juan City Rep. Ronaldo Zamora was tasked by Speaker Gloria Macapagal-Arroyo to negotiate with the Senate to break the budget impasse.

However, Zamora rejected Sen. Panfilo Lacson’s interpretation that the House conceded due to pressure from the Senate.

“The House will withdraw the copy of the enrolled bill that it earlier sent to the Senate. Beyond that, nothing has been discussed or agreed between the two Houses of Congress. These are early days, so not much should be expected at this point,” Zamora said.

“Well, ayoko namang sabihing bumigay [I don’t want to say one camp conceded]. Basically they wanted a sign of good faith in order to continue discussing at basically sinasabi nila nagpadala kayo ng ilang dokumento [they were saying ‘you sent us some documents’] containing the enrolled bill. As you see it, kung puwede bawiin wala namang problema [if it’s possible to take back those documents there shouldn’t be a problem] because until the Senate President in fact signs that, that’s still not an enrolled bill, [right]?” Zamora said.

However, House Committee on Appropriations Chairman Rolando Andaya Jr. said the proposed 2019 General Appropriations Act was approved in plenary at the House of Representatives and the ratification of bicameral conference report on the national budget was also made in plenary.

“Recall of the 2019 GAB [General Appropriations Bill] must also be done in plenary session, with majority members of the House in approval,” Andaya said.

According to Andaya, no congressman has the authority, without plenary approval, to order the recall of the enrolled form of any bill already transmitted to the Senate.

“I really do not know what they are talking about. As Chairman of the Appropriations Committee, I cannot undo an act authorized by the members of Congress. I am just one out of the 291. My powers come from them. A few senators cannot overturn an institutional act,” he added.

The move by Speaker Arroyo—through Zamora—effectively paves the way for the approved budget bill to be signed into law by President Duterte, cutting short the period the national government agencies will be operating under a reenacted 2018 budget law.

Senate President Vicente C. Sotto III, in a separate interview at the groundbreaking of a new Senate building at Bonifacio Global City, told reporters Lacson called him up to confirm that Zamora conveyed the House leadership’s decision to recall their version of the budget bill.

“Yes, Sen.Lacson told me [the other day that] Congressman Ronnie Zamora was in touch, and that they wanted to talk, so Senator Lacson practically asked for my concurrence. I [said] yes, go ahead and talk to them,” Sotto said, adding: “Senator Lacson knows the Senate stand, and that is, precisely, remove what was not agreed upon [in the  budget bill ratified by the Senate],” Sotto said in a mix of English and Filipino.

Sotto added: “Remove from the budget what was not ratified. What’s being referred to is not the one that was itemized—someone’s trying to derail the discussions. They said they merely itemized—but that’s a different matter. That’s okay, because that was what both sides have always agreed on, since 1987. The Senate and the House itemize portions after the approval of the bicameral conference committee, but in general, these are first approved in bicam. Now, we know, and they know, that’s not the itemized things that are the subject of debate. Senator Lacson I think was able to talk to Congressman Zamora already and the feedback is that they will act on it today, if not today, tomorrow.”

The Senate President indicated that senators expect the transmission of the budget bill as it will finally fast-track its submission to the Palace for signing into law.

“We will wait for that action and if it is submitted to us as ratified, I will immediately sign it and consider it an enrolled bill and send it to the President for signature,” Sotto added.

Asked if he saw a middle ground to end the budget deadlock, Recto replied, “The best solution is for the House to sign a budget consistent with the bicameral committee report,” Recto said. “Let us pass the budget as agreed upon as soon as possible. Budget delayed is development denied.”

Andaya has said the 17th Congress has until May 20 to pass the P3.757-trillion national budget. Congress will resume session on May 20 after the three-month break to give way to the midterm elections.

Meanwhile, Arroyo reiterated that there is nothing illegal or unconstitutional in the ratified proposed GAA.

Also, Arroyo insisted that the House will not agree to any proposal to not identify the lump-sum funds in the GAA, as the Supreme Court ruled against it. “We cannot agree to a lump- sum allocation,” said Arroyo.

For his part, Zamora also said the Senate led by Sotto should show and present evidence that the House violated the Constitution when it itemized the lump-sum funds.

“They have to show me where it is illegal. Well, I’ll tell you I’ve been in several bicameral conference committees before, not this one, I’m not a part of this conference committee. You have to itemize, and the appropriations leadership in the House says that is itemization. If the Senate says that is not itemization, they should come up with specifics,” said Zamora.

Earlier, Andaya said the Senate stance on the 2019 national budget will restore huge allocations of previous House leaders and the P75-billion questionable insertions  of the Department of Budget and Management.

If the senators remain steadfast in defending the lump-sum funds, Andaya said this practice will remain and only the favored districts will get their share of the taxpayers’ money.

Andaya reiterated the challenge to the Senate to identify their  lump-sum funds. According to Andaya, the realignment of the Senate is also nowhere to be found in the bicameral conference committee report.

He said the bicameral conference report that the Senate and the House approved on February 8 contained lump-sum funds.

Nothing to do with press freedom, DOJ chief says of Ressa’s arrest 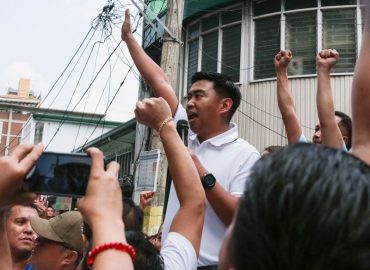