Land reform advocates and a farmer’s group claimed that land grabbing and land use conversion has adversely affected the country’s food security.

This was their revelation as thousands of farmers from Central Luzon, Southern Luzon, Negros, Bohol and Mindanao gathered in a national conference against land grabbing in UP Diliman to present the current condition of land grabbing and land-use conversion that are detrimental to the country’s food security.

“We are losing our agricultural lands and food farms to land grabbing and land-use conversion. This situation has affected the state of our national food security. Even the National Economic Development Authority (NEDA) admits that the country lacks contiguous lands for agriculture and rice planting. In fact, the lingering problem concerning the local rice industry is an inevitable outcome of decades of land grabbing and land-use conversion,” says Danilo Ramos, chairperson of Kilusang Magbubukid ng Pilipinas.

Ramos said more than 52 percent or 12.2 million Filipinos regard themselves as poor in the self-rated poverty survey.

He noted that a high 36 percent considered themselves as ‘food poor’ because they cannot afford to buy adequate and nutritional food for their families.

The KMP official added that “being ‘food poor’ is a result of an undeveloped agriculture and food farming, blaming land grabbing and land-use conversion for the situation.

Due to constant land grabs and land-use conversion, the KMP said control and ownership of lands have slipped out of farmers’ hands.

The group added the conservative data released by the Philippine Statistics Authority (PSA) 2012 Census on Agriculture and Fisheries released in 2015, showed that the average landholding of farmers declined to 1.29 hectares per farm in 2012, from an average 2.84 hectares per farm in 1980.

“More farms and landholdings cover only less than a hectare. “Landlessness of farmers remain a basic and perpetual problem. This is among the main reasons why the country and the economy remain undeveloped,” Ramos said.

“Giving priority to infrastructure projects at the expense our food security will result in bigger problems in the long-run. We cannot rely on importation for our food needs. We need to produce our own food, genuinely develop the local agriculture to foster national industrialization,” he added.

Ramos insisted that “this do not actually support genuine land reform and national industrialization.”

“We have highways and roads but we do not have food on our tables. That is very problematic,” Ramos lamented.

He said mining operations, expansion of foreign mono-crop plantations and the existence of haciendas and big landholdings have led to “our food insecurity.’’

The group has constantly demanded for genuine land reform and free land distribution. 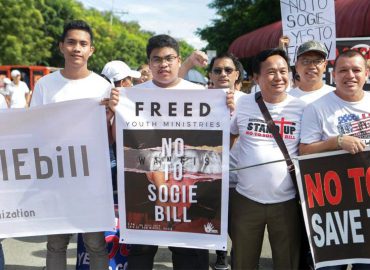