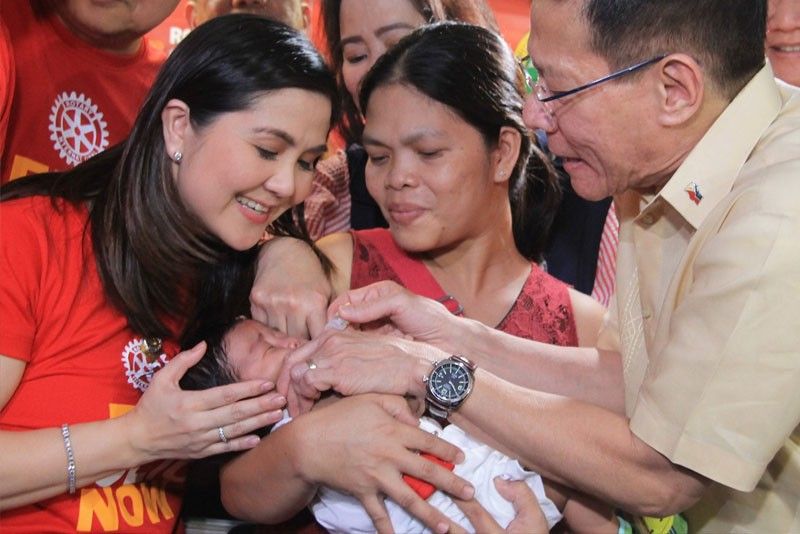 MANILA, Philippines — Adults have a very low chance of contracting polio, according to the Department of Health (DOH), after the country recorded its first cases of the disease in two decades – an occurrence blamed on the country’s poor immunization coverage and environmental sanitation.

He said to prevent it from spreading, they will again have synchronized door-to-door immunization activities starting next month in Lanao del Sur and Laguna, where the first two cases were recorded.

Metro Manila and Davao were included in the list after Type 1 polio and Type 2 were found in their sewage system. Domingo gave assurance the priority for vaccination are children below five years old as they are the ones most at risk.

The DOH, stressing that the country remains polio-free, lamented how poor monitoring of acute flaccid paralysis (AFP) also led to the re-emergence of the crippling disease after two decades.

“Our AFP surveillance is quite poor over the past few years. Every time a child is manifesting AFP, he should be reported so that stool samples can be collected from him to determine if it is polio or not,” he noted.

AFP is defined by the World Health Organization as the sudden onset of paralysis or weakness in any part of the body of a child less than 15 years old. Polio is one of the many causes of AFP.

“We are still polio-free because we don’t have wild poliovirus. The two cases that we have are vaccine-derived polio (VDP). We just have to stop its transmission so that we can go back on track,” he maintained.

VDP virus is a strain of the weakened poliovirus that was initially included in the oral polio vaccines being given to children to immunize them against the debilitating and sometimes fatal disease.

Vice President Leni Robredo said she expects government agencies, particularly the DOH, to be more aggressive in implementing mass vaccination to prevent the spread of the disease.

“We need to catch up for all we missed out due to the controversy,” she said.

Joining Robredo in calling on parents to vaccinate their children, the Catholic Bishops’ Conference of the Philippines (CBCP) yesterday said parents should take proactive steps to ensure that their children would not be affected by the contagious disease.

“It is very sad that there is a re-emergence of polio after having eliminated it for many years. This tells us that we should not let down our guard in fighting diseases,” said Manila Auxiliary Bishop Broderick Pabillo.

But some parents are still apprehensive of availing themselves of the government’s various vaccination programs as a result of the Dengvaxia scare, where hundreds of children allegedly died after receiving the anti-dengue vaccine.

Pabillo said, “The fear of the parents will have to be addressed by educating everyone about the vaccination against polio – that it is safe and necessary.”

“The resurgence of polio is a measurement of the effectiveness of fake news being spread by fear-mongers against vaccines and a testament to the new challenges the public health sector is facing,” Iloilo Rep. Janette Garin said.

She said parents have been avoiding vaccines “since non-experts have started talking, claiming they knew everything about the dengue vaccine” and that unfounded claims on vaccines “resulted in Filipinos fearing going to their doctors and to the barangay health centers to vaccinate their children; thus, a massive coverage reduction, leaving all of us at high risk.”

Amid the ongoing outbreaks of measles and polio, the DOH is confident that the P10-billion budget cut in 2020 for health services will not affect its immunization activities.

“The program for national immunization will remain the same, the supply of vaccines will not be affected,” he noted.

However, he said the DOH is looking forward to the assurance of the Department of Budget and Management that budgetary requirements for health personnel will be funded through the “miscellaneous personnel benefit fund (MPBF).”

The health official added that while polio is among the illnesses that are reportable to the DOH regional offices, many hospitals do not comply with this.

But he admitted that DOH also has its shortcomings, particularly in the monitoring of compliance as there has been no “focal person” for the disease in the past years.

Based on a report prepared by the DOH-Epidemiology office, there were 264 AFP cases documented from Jan. 1 to Sept. 7, including the two polio cases recorded in Lanao del Sur and Laguna recently.

The DOH regional official in Zamboanga also disclosed that at least seven suspected polio cases were registered in Zamboanga peninsula.

The cases have been forwarded to the Research Institute for Tropical Medicine (RITM) for confirmatory testing, according to Dennis Dacayanan, cluster head of DOH-9 regional epidemiology surveillance unit.

Emilia Monicimpo, DOH-9 regional director, however said Zamboanga peninsula still has zero positive case of polio since it was eradicated 19 years ago.

Nine million to get National ID by Dec