Malacañang immediately hailed the verdict as “triumph of [the] justice system in the Philippines.” Presidential Spokesman and Chief Presidential Legal Counsel Salvador S. Panelo said the President vowed not to pardon the three convicted cops.

“It is a testament that we have a robust and working justice system, contrary to what this administration’s detractors are depicting,” Panelo said.

He added that the President will never tolerate policemen who “intentionally kills,” noting that it is the administration’s policy from the start to be intolerant of any kind of abuse from the military as well as the police.

Caloocan Bishop Pablo David, for his part, said he hopes the conviction will give justice to the families of victims of extrajudicial killings.

The conviction of the policemen is the first in the Duterte administration amid its all-out war against illegal-drug operations in the country, which has reportedly resulted in the death of thousands of drug users, peddlers and reportedly some innocent civilians.

Sought for his comment, Justice Secretary Menardo I. Guevarra said: “Not sure if this is the first conviction but what I can say is that we will continue to dispense justice, and let the hammer fall where it should be.”

The trial curt said the prosecution failed to prove the guilt of the accused beyond reasonable doubt.

On the other hand, the court archived the case against the alleged police asset Renato Loveras, who pinpointed de los Santos as drug pusher pending his apprehension.

An alias warrant was issued against him by the court.

In its ruling, the trial court did not give credence to the claim of Oares that de los Santos’s death was a result of a shootout.

Oares’s  version, based on the ruling, is contrary to the physical evidence presented by the prosecution.

The court noted that the three policemen were positively identified by witnesses Princess Ann Alano and Ma. Luisa Walican as the ones who accosted and brought de los Santos at the dark-end side of the Tullahan River in August 16, 2017, where he was shot dead.

The court also did not give weight to the alibi of his co-accused that they did not conspire with Oares to kill de los Santos.

It pointed out that witnesses saw the two policemen together with Oares when the victim was accosted at the sari-sari store/pharmacy and brought to the Tullahan River.

Pereda was identified as the second shooter while Cruz provided assistance as he stood guard to ensure the death of the boy.

IN its ruling, Judge Azucena reminded policemen that the use of violence should be the last resort in the performance of their duty as law enforcers.

“A shoot first, think later attitude can never be countenanced in a civilized society. Never has homicide or murder been a function of law enforcement. The public peace is never predicated on the cost of human life,” the judge said.

In its resolution issued early this year, the Department of Justice (DOJ) found probable cause to indict the policemen and Loveras in the said crimes.

The DOJ panel of prosecutors dismissed the claim of the accused that de los Santos was killed after engaging them in a shootout to avoid arrest.

The DOJ gave credence to the testimonies of  eyewitnesses who saw the victim talking to the policemen before he was dragged to near the Tullahan River where he was shot dead.

The panel noted the absence of gunpowder nitrates on the hands of de los Santos, disproving the allegation that he fired shots at the policemen.

Likewise, the panel pointed out that based on the forensics reports provided by the Philippine National Police and the Public Attorney’s Office, the bullet entries and trajectories indicated that the victim was shot at close range.

Furthermore, the handgun allegedly belonging to Kian was found on his left hand, which runs counter to witnesses’ account that he is actually right-handed.

The panel dismissed the claim of the respondents that it was their asset who was being dragged by Pereda and Cruz and not de los Santos, as captured on the CCTV footage.

The panel said several witnesses have testified that it was Kian who was in the CCTV based on what he was wearing at the time he was killed.

The DOJ, on the other hand, found no probable cause to file criminal charges against 13 other policemen who were earlier named as corespondents in the case. 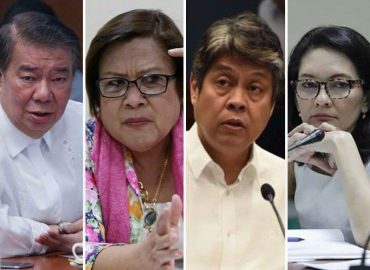