The Department of Labor and Employment (DOLE) has ordered the regional wage boards to review whether another round of increase for the country’s 4 million minimum wage earners could be imposed next year to cushion the impact of soaring prices of food and other basic commodities.

“This (wage hike) is something we are studying. We are not disregarding recent events. That’s why our Regional Tripartite Wages and Productivity Boards (RTWPBs) have the directive that even though we just recently issued wage adjustments, we will still consider the current situation so we can help our workers and entrepreneurs,” Labor Secretary Bienvenido Laguesma said in a television interview on Tuesday.

The labor chief noted that wage adjustments could be made only once a year, but said the RTWPBs were already assessing the factors, such as the recent typhoons, the ongoing pandemic and high inflation, that could merit another pay increase for workers.

The last minimum wage adjustments were implemented in June this year following the surge in fuel prices as a result of Russia’s invasion of Ukraine that sent global crude oil prices soaring.

Then Labor Secretary Silvestre Bello III noted that workers in Metro Manila earning P537 a day might no longer be able to cope with the daily cost of living. The minimum wage in the National Capital Region was raised by P33 to P570 a day. The increases in regional minimum wages ranged from P30 to P110.

During the Duterte administration, the minimum wage was adjusted once in 2018.

Regarding the planned provision of fuel subsidies and other nonwage benefits, Laguesma said DOLE was coordinating with other government agencies, such as the Department of Trade and Industry, the Department of Agriculture and the National Economic and Development Authority.

For Elmer Labog, chair of the militant Kilusang Mayo Uno (KMU), the minimum pay of P570 in Metro Manila was just equivalent to P494 when adjusted for inflation.

“It is not even considered a living wage and now, the value of the minimum wage worker’s salary has been reduced because of high inflation,” he said in a statement on Tuesday.

Inflation, a measure of the average increase in the prices of basic food items and services such as transportation and electricity, accelerated to its fastest pace in nearly 14 years at 7.7 percent in October, the highest since December 2008. It is projected to rise further due to supply constraints especially for farm products after a series of typhoons hit the country.

KMU urged the President to immediately implement a wage increase amid expectations that inflation could remain elevated and even peak in the next two months.

Another labor group, Partido Manggagawa, called on Congress to legislate a P100 increase across the board in response to the inflation.

This developed as the Philippines continued to reap the benefits of an economy reopened from debilitating lockdowns and mobility restrictions in 2021 with the unemployment rate approaching prepandemic levels at 5 percent in September.

Results of the latest monthly Labor Force Survey (LFS) showed a lower jobless rate compared to 5.3 percent in August and 8.9 percent in September 2021.

National Statistician Dennis Mapa said in a briefing the number of Filipinos who were of employment age and actively looking for a job but failed to get hired decreased by 183,000 to 2.5 million from 2.68 million in August. 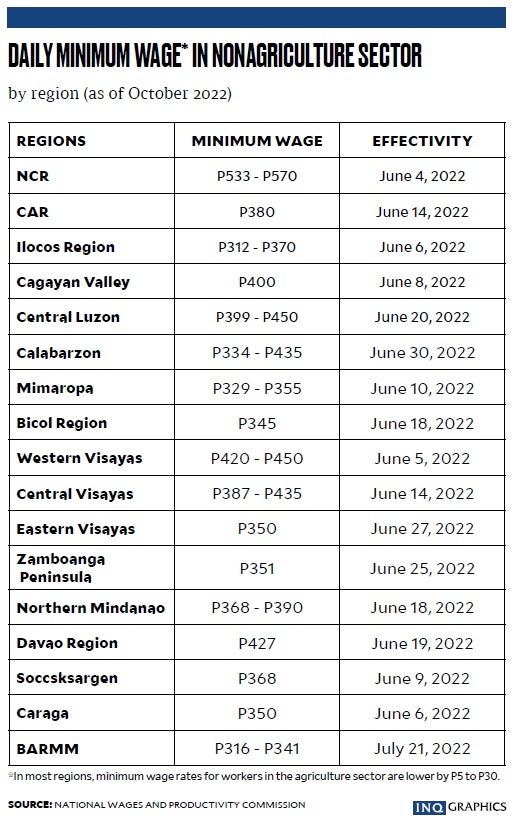 Compared to September 2021, the number of jobless Filipinos declined by 1.78 million from 4.28 million.

Last September, there were 50.08 million working-age Filipinos who do have jobs or were looking for jobs, or what is called the labor force. This was 470,000 less than the 50.55 million recorded in August.

“The unemployment rates in the last three survey rounds [5.2 percent in July, 5.3 percent in August and 5 percent in September] bring us closer to the prepandemic full-year average of 5.1 percent in 2019,” he added.

Survey results showed that the services sector accounted for 59 percent, or 28 million of the 47.6 million Filipinos with jobs.

The industry sector employed 19 percent, or 8.85 million, while the agriculture sector had 22 percent, or 10.7 million.

The manufacturing industry had the biggest gain of workers, beefing up its workforce to 4.45 million by adding 780,000 individuals.

On the other hand, wholesale and retail trade let go of the biggest number of workers at 335,000 individuals.

The workforce of administrative and support service activities was leaner by 289,000 while the construction industry shed 197,000 workers.

Ease of doing biz bill up for ratification

Lacson: 2 lawmakers get P1.5 billion in pork each