The BSP will “closely look at how banks will use funds freed up by RRR cut,” Mr. Diokno told a forum in Manila on Friday, a day after announcing a 2 percentage-point reduction in the funds that large banks must hold in reserve.

“Proper use will encourage further cuts and speculation will do otherwise.”

The reserve ratio will be lowered in three stages: to 17% from 18% on May 31, then to 16.5% on June 28 and 16% on July 26. The move follows a 25 basis-point reduction in the benchmark interest rate, providing more stimulus to the Philippine economy after it grew at the slowest pace in four years in the first quarter.

Mr. Diokno, who took office in March, is following through on a pledge by his predecessor, the late Nestor A. Espenilla, Jr., to bring down Southeast Asia’s highest reserve ratio to single digits by the middle of 2023. The move should help ease a liquidity crunch after money supply grew at the slowest pace in more than a decade at 4.2% in March. Loan growth was the lowest since 2015 in the same month.

The Monetary Board initially planned to implement a series of four cuts of 50 basis points each but decided to move more aggressively “to reduce speculation and allow bankers to prepare,” Mr. Diokno told the Italian Chamber of Commerce.

“There is no point in postponing what should be done anyway.”

The Philippine Stock Exchange index ended a five-day losing streak a day after the BSP announcement, gaining 108.66 points or 1.45% to close 7,583.82, with financials posting the biggest rise among the six sectoral indices at 2.24%.

THE GOVERNATOR
“I like this new governor of the BSP — he is like the governator,” Trinh Nguyen, senior economist at Natixis Asia Ltd., wrote on Twitter after Mr. Diokno said there’s no point delaying what must be done.

For Carel D. Halog, senior vice-president at the Land Bank of the Philippines, the reserve ratio cut is a step in the right direction. “It’s very timely and a welcome relief for banks. It will help lower intermediation cost and encourage lending.”

In a statement sent to journalists late Thursday, the Bankers Association of the Philippines (BAP) welcomed the RRR cut as as “a complementary boost” to the economy amid easing inflation.

“It is a bold move, coming on the heels of a policy rate cut, but equally appropriate given how our financial system has advanced under the BSP’s stewardship,” added Mr. Consing, who is also the president and chief executive officer of Bank of the Philippine Islands.

Headline inflation eased for sixth straight month to a 16-month-low three percent in April, taking the year-to-date pace to 3.6% against the BSP’s 2-4% full-year target range.

Nations across Asia are turning to looser monetary policy to bolster their economies as a full-blown trade war between the United States and China continues to weigh on the global outlook. India lowered rates twice this year, while Malaysia and New Zealand eased this month. — main article by Bloomberg 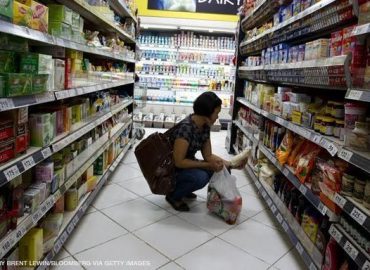