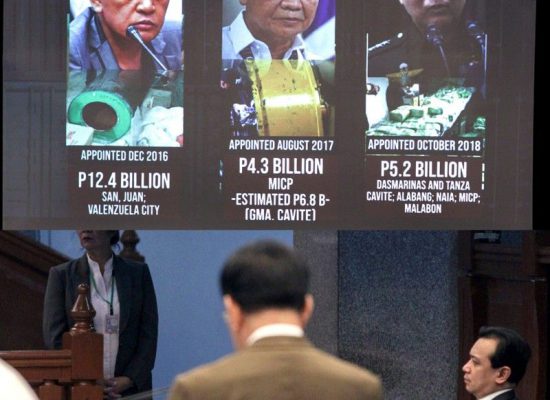 The drugs, allegedly from the Golden Triangle international drug syndicate, were accidentally discovered before they could be distributed on the streets.

In a privilege speech titled “What a Mess: A Dumping Ground of Garbage and Drugs,” Lacson expressed suspicion that the auction on April 22 of three shipping containers supposedly with 114 bags of tapioca starch kept in aluminum pallets was simply a cover-up of a botched drug delivery by corrupt BOC officials.

“Let’s assume for a while that we are buying their story. Is the BOC legally allowed to subject prohibited goods to public sale or auction? No matter how they twist their story, the version of the BOC and PDEA of what happened is really very murky,” Lacson said.

Last week, PDEA announced it had recovered some 146 kilos of shabu from Cambodia at the Goldwin Commercial Warehouse in Malabon City.

The shabu was reportedly discovered by a warehouse worker, who reported the matter to the PDEA.

PDEA chief Aaron Aquino claimed the drugs came from the Golden Triangle syndicate and were linked to the shabu seized earlier this year in Dasmariñas and Tanza, both in Cavite, worth P244 million and P1.9 billion, respectively.

The BOC earlier issued a statement saying the shipment was forfeited in favor of the government on March 1 after the consignee failed to file an import entry with Customs.

The BOC also said the agency and PDEA jointly inspected the three containers and were able to verify that the shipment indeed contained illegal drugs.

But instead of immediately seizing the illegal shipment, the BOC and PDEA decided to allow it to be auctioned off in the hope of smoking out possible members of the drug syndicates in the country who may participate in the bidding in a sting scheme called “controlled delivery.”

Lacson, however, was skeptical of the version of the story of the two agencies, as Republic Act 10863 or the Customs Modernization and Tariff Act specifically excluded prohibited goods to be disposed by public auction.

The same law mandates the destruction of prohibited goods, such as illegal drugs, seized by the BOC.

“Again, assuming that we believe their ‘controlled delivery’ story – which we of course do not – did Customs and PDEA officials really expect the owners of this shipment to actually participate in the said public auction, knowing fully well that forfeited and seized commodities undergo 100 percent physical examination prior to disposition?” he asked.

The senator said he pieced together the “real story” based on some documents and the schemes uncovered by the Senate in previous investigations into the entry of illegal drugs through the BOC.

The senator cited a report signed by PDEA regional director III Joel Plaza dated March 11 or 10 days after the forfeiture in favor of the government of the shipment and 11 days before its supposed seizure in the Malabon warehouse that stated “…the specimens submitted do not contain any dangerous drugs, controlled precursors and essential chemicals.”

On May 22, the subject shipment was released to the winning bidder and delivered to the warehouse at 89 F. Santos St., Santolan, Malabon City.

During the cleaning and washing of the commodity, one of the aluminum pallets accidentally fell off, exposing aluminum foil containing the illegal drugs, the PDEA reported.

“It does not take much to figure out the holes in the plot that some not-so-smart characters in these agencies tried to fabricate – but failed miserably. Simply put, this is a case of dishonesty with the intention of misleading the public,” Lacson said.

He lamented that despite several changes in the BOC leadership, the smuggling of drugs through the agency continues unabated, aided by the “recycling” or reappointment and promotion of Customs officials linked to corruption and illegal drugs.

He said his sources confirm that certain departments in the BOC continue to take their “tara” (grease money) ranging from P5,000 to P50,000 per container.

Lacson said BOC Commissioner Ray Leonardo Guerrero must immediately and decisively act on the illegal activities in his agency that is abetting the entry of such a huge volume of drugs.

He noted the ingenious schemes of illegal drug smuggling in the recent three leaderships of the BOC – from the metal cylinders during the time of then commissioner Nicanor Faeldon to the magnetic lifters of retired general Isidro Lapeña to the most recent one.

He said since 2017, over P20 billion worth of shabu that passed through the BOC have been intercepted.

Citing law enforcement reports, Lacson said the Malabon raid was also linked to the other shipments recently recovered by authorities, including the P2 billion worth of illegal substances in two separate raids in the province of Cavite; the 13.1 kilograms of shabu valued at P90 million in a shipment concealed as car mufflers at the Ninoy Aquino International Airport; the 276 kilos of suspected shabu seized at the Manila International Container Port.

Co, who is said to be on the Interpol watch list and among the wanted personalities in China, is also involved in kidnap-for-ransom in the country, he said.

The Chinese national is reportedly the owner of Feidatong International Logistics Co. based in Bulacan.

Agriculture under pressure to contribute more to growth