THE BANGKO SENTRAL ng Pilipinas (BSP) is widely expected to keep monetary policy settings steady on Thursday, according to comments from economists late last week, in which three said they see a reduction in benchmark interest rates while five projected a cut in banks’ required reserves in the months ahead.

The BSP’s Monetary Board meets Thursday for its second policy review for 2019. It will be the first time newly seated BSP Governor Benjamin E. Diokno, former Budget secretary, will preside over the review.

Ten out of 13 economists said the Monetary Board will likely keep benchmark rates steady this Thursday, noting that while headline inflation has been on a downtrend since the nine-year-high 6.7% clocked in September and October last year, it still hovers just below the ceiling of the central bank’s 2-4% target range for this year.

Headline inflation clocked in at 3.8% in February, marking the slowest pace in 12 months and taking the year-to-date rate to 4.1%. Core inflation, which strips out volatile energy and food prices, clocked in at a faster 3.9% in February that, while easing from January’s 4.4%, was still faster than the year-ago 3.0%.

“Indeed, core inflation is at 3.9%, higher than headline at 3.8%, which suggests underlying price pressures remain elevated. As such, we believe it would be most prudent for the BSP to wait until inflation is more firmly within its target before engaging in any monetary accommodation,” HSBC Global Research Economist Noelan Arbis said in a March 11 report.

The BSP expects headline inflation to average 3.1% this year, from the actual decade-high 5.2% clocked in 2018.

Citing inflation’s downtrend in the past four months, three economists said the central bank may trim benchmark rates by 25 basis points to 4-5% from 4.25-5.25% currently.

“Inflation is on a sustained downtrend so there is no pressing need to keep the aggressive tightening that occurred last year in place,” Moody’s Analytics Economist Katrina Ell said in an e-mail, adding that monetary settings will likely loosen gradually in the months ahead.

Other analysts noted that inflation data are not yet enough for the central bank to cut interest rates, an action that may take place in the next May 9 policy review that will be the third for 2019.

“So far, they have one data point of inflation within target [February’s 3.8%] and by the 9 May meeting they will likely have three months’ worth of sub-4% inflation and an inflation target very well in hand,” ING Bank N.V. senior economist Nicholas Antonio T. Mapa said. “With the price target looking more and more achievable, it would be about time for the BSP to consider why they target price stability in the first place: to provide an environment conducive for economic growth.”

For Ruben Carlo O. Asuncion, Union Bank of the Philippines, Inc. chief economist, a cut in reverse repurchase (RRP) rate, now at 4.75%, would be “premature” as two inflation data points — 3.8% in February and a 3.6% projection in March — are not enough. “This hold call would largely hinge on the predicted growth outlook of the BSP for Q1. ERU (UnionBank’s Economic Research Unit) believes that May would be the first time that the BSP cuts RRP,” Mr. Asuncion said.

Mustafa Arif, economist at ANZ Research, took cue from his statement. “That said, the governor’s comments around the need for further data to confirm the trend and the importance of ‘timing’ suggests to us that a rate cut in March is not on the cards,” Mr. Arif said in a report on Friday. “However, we expect a 25bp cut at the May meeting, followed by two more cuts to bring the RRP to 4.00% by the end of 2019.”

DBS Bank Economist Masyita Crystallin flagged the impact of El Niño’s dry spell on food prices as well as of the deadlock over the 2019 P3.757-trillion national budget on overall economic expansion. “I think inflation risk could be elevated driven by higher staple food price due to El Niño. Besides risk to inflation, we see that budget approval delay could weigh on growth this year,” Ms. Crystallin said.

The government is currently operating on a reenacted 2018 budget that leaves new programs and projects unfunded.

Some of the market watchers said a percentage point cut in the banks’ reserve requirement ratio (RRR) may be in the cards at BSP’s policy meeting on Thursday.

“A cut in RRR during March 21 is highly probable, and we are basing it on what Gov. Diokno said of one percent cut every quarter,” said Robert Dan J. Roces, Security Bank Corp. economist.

Mr. Diokno had said on Tuesday last week: “I think there’s room for monetary easing. It could be one percentage point every quarter for the next four quarters,” adding that “We’ll look at the data and see, because every time we reduce our reserve requirement by one percent, that translates to P90-100 billion in the economy.”

BSP Deputy Governor Diwa C. Guinigundo has said that an RRR cut is “always on the table.” “It’s a line item in the monetary board discussion, but it needs more discussion at the board,” Mr. Guinigundo told reporters following a press conference on Friday. “We should see some reduction in the reserve requirement at the appropriate time.”

The BSP slashed the RRR in two 100-basis-point moves in March and June 2018 that brought the mandatory reserves for universal and commercial banks to 18% of their total deposits — a level Mr. Diokno last Tuesday said was “very high”.

“A data-dependent central bank means they will still strongly consider factors on top of inflation… money supply (M3) as well which grew by only 7.6% in January — they would want to factor that in as well and probably want to see if liquidity growth will be lower or within manageable levels,” Security Bank’s Mr. Roces said.

For Rizal Commercial Banking Corp. economist Michael L. Ricafort, there will be no change in RRR at the March 21 meeting, as the BSP may choose to be “more prudent” by waiting for the year-to-date inflation to revert back to the 2-4% target band. Still, he said that a percentage point cut this week “cannot be completely ruled out.”

The late Governor Nestor A. Espenilla, Jr. had set a goal to bring the RRR to single-digit level by 2023 to put it at par with those of regional peers and to reduce the cost of borrowing money. 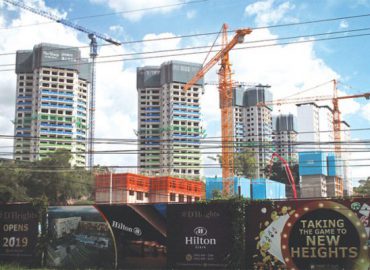 Coco farmers to lawmakers: You should’ve listened to us