A bill extending the availability of the 2021 budget appropriations until the end of next year was filed in the Senate after the House approved a counterpart measure on third reading Monday.

The extension was intended to provide more time to implement projects and programs as the coronavirus pandemic has “drastically affected businesses and employment,” delaying planned expenditures.

“I support extending (the) validity of (the) ‘21 budget,” Senate President Pro Tempore Ralph G. Recto said earlier in a message to reporters.

Senate Minority Leader Franklin Drilon also expressed his support, noting the poor disbursement rate of 31.5% for budget funds in 2021 due to the pandemic. “Underspending is like a disease that impedes our growth,” he added.

“We should use the budget in order to generate economic activities, feed Filipinos and create jobs amid the pandemic,” he said in a statement.

If enacted, all appropriations authorized in the 2021 GAA, including budgetary support to government-owned and -controlled corporations, will be available for disbursement under the same general and special provisions until Dec. 31, 2022.

Appropriations for the National Disaster Risk Reduction and Management Fund for calamities, epidemics, armed conflicts, terrorism, and other catastrophes occurring in 2021, as well as financial aid to local government units (LGUs), will be available for release until the end of 2023, while appropriations for the LGU share of National Government income will be available for obligation and disbursement until fully expended.

After the end of the validity period, all remaining appropriations will revert to the unappropriated surplus of the general fund.

Sen. Juan Edgardo M. Angara, who chairs the Senate Finance committee, also backed the proposed bill. “We personally support the extension, and hopefully our colleagues in the Senate will too. Because of the extended lockdowns and occurrences, budget and project implementation has been less efficient and smooth.”

“Rather than the funds reverting to the national treasury, it would be better for the country’s recovery if we were to extend the effectivity of the 2021 budget in order to implement projects and fund programs which might have been delayed during the year for one reason or another,” he said in a statement.

According to the bill, appropriations for infrastructure, operating expenses, and capital outlay will only be valid until the end of 2022, but the completion of construction, inspection, and payment process may extend until the end of June 2023.

The Budget department is authorized to issue the guidelines for the effective implementation of the cash budgeting system.

President Rodrigo R. Duterte has approved similar legislation that extended the validity of the 2019 and 2020 national budgets 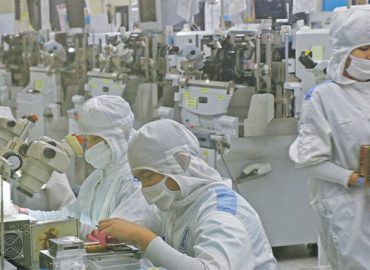 BSP: manufacturing gets 1/3 of FDI