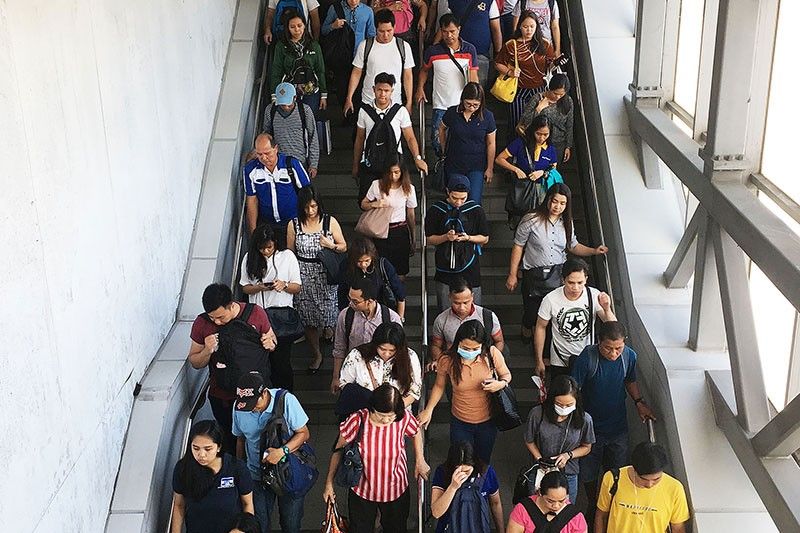 MANILA, Philippines — Malacañang yesterday denied there was a transport crisis in Metro Manila, as claimed by sectors and lawmakers, amid the displacement of thousands of commuters due to the burgeoning traffic situation coupled with scaled down operations of the Light Rail Transit 2 which spans Recto Avenue in Manila to Santolan station in Marikina.

“What do they mean by transportation crisis? I just see traffic. There is transportation, we all manage to get a ride,” Panelo said yesterday.

The situation only calls for commuters to wake up early to get to their offices or appointments, he said.

“People get to where they need to go. There is a solution here, if you want to arrive early (at) your destination, then you go there earlier,” Panelo, who is also presidential legal counsel, said.

System issues in the three main railways of Metro Manila are worsening the daily commute of workers in the country’s capital.

Operations of LRT-2 have been suspended since Oct. 3 after a fire broke out at its Katipunan station, damaging equipment and parts of the tracks. Operator Light Rail Transit Authority (LRTA) resumed partial commercial operations yesterday, with trains running up to Cubao in Quezon City from Recto in Manila only.

The line ferries around 220,000 passengers daily, according to the LRTA. The volume of traffic is expected to become heavier as the holiday season draws closer.

Panelo said one way to solve the problem is for the Land Transportation Franchising and Regulatory Board (LTFRB) to look into public concerns on the grant of franchises and new routes of e-jeepney units under the transportation modernization program of the government.

“That’s the call of the LTFRB. There must be a reason why there is a delay, if there is delay. It should be competent to know whether or not it has to grant franchises to help ease the problem on transport,” Panelo said.

Modern jeepneys are seen as possible alternative modes of transport following the disruption of LRT 2 services, highlighting the need to upgrade other forms of mass transport in Metro Manila.

Since it was launched in 2017, many transport cooperatives, including those operating in the eastern part of Metro Manlla which covers the areas of Rizal and Marikina, have not been granted permits for new routes by the LTFRB, causing massive delays on the deployment of e-jeepneys.

The worsening transportation crisis affecting millions of commuters and motorists in Metro Manila should prompt labor regulators and employers to utilize alternative solutions such as telecommuting or work-from-home schemes to maintain the productivity of workers, Sen. Joel Villanueva said yesterday.

Villanueva, chairman of the Senate committee on labor and employment and author of Republic Act 11165 or the Telecommuting Law, pushed for more options for employees to fulfill their duties while minimizing the need to go out of their homes and travel to their places of work.

“Given our worsening traffic situation which is compounded by the partial shutdown of the LRT 2, it’s really high time for employers to consider the benefits of telecommuting,” the senator said.

“It’s not right that our workers now consider traveling to and back from work for their loved ones as torture,” he said.

He asked the Department of Labor and Employment (DOLE) to work faster in drawing up the list of jobs that can be implemented under a telecommuting arrangement.

He also urged DOLE to raise public awareness on the option for telecommuting.

The law encourages employers in the private sector to adopt telecommuting, a work arrangement that allows an employee to work from an alternative workplace with the use of telecommunication and other relevant technology.

The law provides protection for workers who will decide – with agreement of their employers – to work from home, he added. Workers under a telecommuting arrangement will receive the same compensation and social protection benefits as other workers who report to or work in offices.

Villanueva also urged employers with current telecommuting policies to align with existing standards of the labor department to ensure compliance with the law’s implementing rules and regulations, which were promulgated in March this year.

Meanwhile, Sen. Sherwin Gatchalian asked the LRTA to seriously look into the privatization of the operation and maintenance of the LRT-2 in order to avoid disruptions in operations, such as the current shutdown of the entire line, and the projected stoppage of operations of the Santolan, Katipunan and Anonas stations for the next nine months.

“The LRT Line 2 is the only remaining segment among the three existing LRT and MRT lines that has yet to be privatized,” Gatchalian said.

Apart from providing free rides to affected commuters, the LRTA must also study the long-term viability of LRT-2, he said. – With Paolo, Romero, Edu Punay