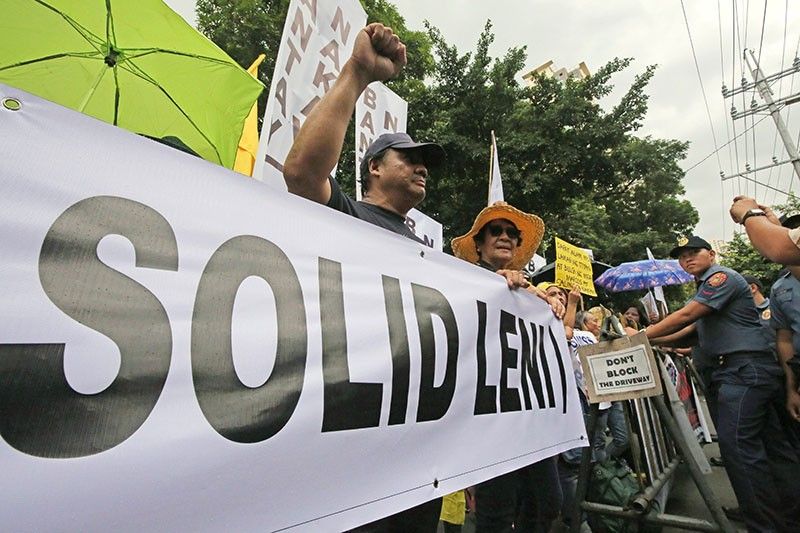 “For those inquiring, the PET did not take any action on the vice presidential election protest case during the tribunal’s session. The case remains pending and is still being deliberated by members of the tribunal,” SC spokesman Brian Keith Hosaka said.

As to when it would be deliberated by the PET, Hosaka said there was no decision yet. “But the Chief (Justice) had already said before that the PET meets for discussion every week,” he added.

Malacañang said it is leaving it to the PET to deliberate on the election protest of Marcos.?“We will leave it to them. We will leave it to the tribunal to decide on its own whatever pending cases it has… The President is always on the side of the law. Whatever the law says, we should enforce it,” presidential spokesman Salvador Panelo said.

“We will not intrude into the competence and authority of the Presidential Electoral Tribunal. It has to decide on its own on the basis of what is required by law and the evidence,” he added.

Supporters of Robredo led by the Bantay Nakaw Coalition held a rally outside the SC asking the justices to dismiss the petition filed by Marcos.

The Vice President’s camp said they are hoping there would be no more delays in the PET ruling.

“We are business as usual and we just have to wait again for developments next Tuesday,” Robredo’s spokesman Barry Gutierrez said.

Robredo’s lawyer Romulo Macalintal on Monday filed a motion asking the PET to release the official results of the initial recount, saying it would put to rest speculations on the case.

Gutierrez noted that under PET rules, failure to gain a substantial recovery during the recount on the pilot provinces could be used as a basis to dismiss the case.

While the official recount results have yet to be released, he said unofficial data from their revisors showed Robredo even increased the margin of her victory following the manual counting.

“We hope that the PET would see fit to act expeditiously on the latest motion of attorney Macalintal,” Gutierrez said.

“The easiest way, the best way to actually dispel any of these rumors – these are not damaging to us but to the PET and the process itself – is to come out with the report. Make it public, let the public (see the results),” he added.

“Like everyone else, we also patiently waited for the PET decision that was moved again to the 15th. Until then we have no statement to make in deference to the Presidential Electoral Tribunal and the honorable justices,” he said.

Sen. Imee Marcos said the family is praying for a favorable ruling.

Marcos said compared to herself who comments about the case, her younger brother is a patient man.?“It’s like we’re already tired of waiting, so we don’t talk about it ,” she said.

“Of course our opinion is that we want it (recount) to continue, but let’s see. We’re pinning our hopes on the Supreme Court. We pray a lot,” she added.?Marcos has been contesting Robredo’s victory since June 29, 2016. He filed an election protest asking the PET to declare Robredo’s victory as null and void; to conduct a recount of ballots in all of the 36,465 protested clustered precincts in 27 cities and provinces; and to declare the election results in Lanao del Sur, Maguindanao and Basilan as null and void on the grounds of terrorism, intimidation and harassment of voters.

With his electoral protest, Marcos was allowed to designate three provinces which best exemplify election fraud for the manual recount and could serve as basis whether the tribunal would proceed with the recount in all protested areas.

Marcos chose the provinces of Camarines Sur, Iloilo, and Negros Oriental for the physical revision or recount.

They have also brought in revisors and three commissioners to go through the clustered ballot boxes from the 2016 elections.

In 2017, the PET junked the first cause of action against Robredo in upholding the integrity of the automated election system.

Chief Justice Lucas Bersamin earlier said the PET had to be careful in deciding the case, saying the credibility of the elections as well as the political system is at stake.