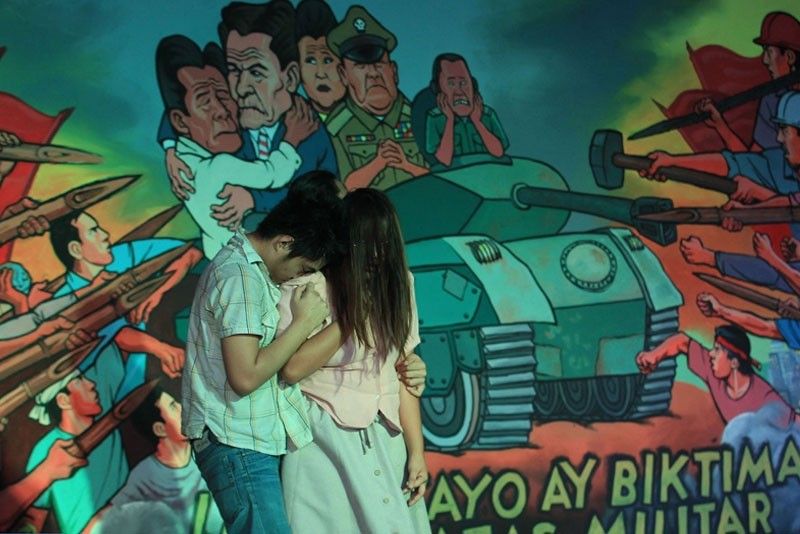 MANILA, Philippines — Malacañang called the application of martial law a “tool to save the exercise of democracy” even as it acknowledged that the abuses committed during the Marcos regime created a “deep wound” on an entire generation.

“Those who perceive that a declaration of martial law is anti-democratic (are) oblivious of the fact that its application is precisely the very tool to save the exercise of democracy. It is only when it is clothed with abuse by its enforcers that it becomes obnoxious,” Panelo declared in a statement issued a day after the 47th anniversary of military rule.

He added that, “regardless of political persuasion, the Marcos martial law continues to haunt those who have traumatic experiences during the one-man rule. Perforce, it is best to reflect on this day to learn the lessons derived therefrom, using the same to unite us as one people and one country.”

Panelo acknowledged, though, that the “imposition of martial law and the abuses it spawned, even as it instilled discipline among the citizenry at its inception, as well as reaping success in dismantling the then spreading communist insurgency in the country, created a deep wound to an entire generation.”

He disputed the view of groups opposed to the very concept of martial law, saying it only becomes “obnoxious” if there are abuses, noting that the proclamation of martial law “arises only upon constitutional dictates.”

“Despite the fears and the trauma it created following its declaration, the framers of the 1987 Constitution acknowledged the necessity of its use to save the Republic from ruin against the enemies of the state, deeming it wise to vest it once more with the President albeit diminishing its discretionary use by adding more safeguards for its abuse,” Panelo said.

“Relative to our quest to strengthen the republic and its institutions, the Palace urges everyone to look at the past to guide us on what to do with the present, that it may serve us better in the future,” the presidential spokesman also said.

Marcos placed the entire country under martial law on Sept. 21, 1972 supposedly to counter the threats posed by communist insurgency. The military rule was tainted with allegations of human rights abuses, censorship and cronyism—issues that hounded the Marcos administration until the late dictator was ousted in the historic 1986 People Power Revolution.

Duterte, a vocal admirer of Marcos, has placed Mindanao under martial law in 2017 as a response to the attacks of Islamic State-aligned extremists in Marawi City.

He was accused of trying to revise history and deodorizing the image of Marcos after he allowed the burial of the late president at the Libingan ng mga Bayani in 2016. Duterte has justified his decision, saying Marcos was qualified to be given a hero’s burial as a former president and soldier.

Meanwhile, Vice President Leni Robredo suggested over dzXL yesterday that a subject that tackles the situation of the country under martial law should not only be taught at the University of the Philippines-Diliman but in other universities in the country as well.

She believes that students will get accurate information about martial law in schools than in social media. Robredo had repeatedly criticized the supposed revision of history by Marcos’ allies and family.

Starting next semester, students at UP Diliman may enroll in a general education subject that will tackle the language, literature and culture under martial law in the Philippines.

To be offered by the university’s Departamento ng Filipino at Panitikan ng Pilipinas, the subject will be available for students from all disciplines as an option for their general education subject requirements.

Martial law was imposed in the Spanish occupation of the Philippines and most recently during the time of Marcos, former president Gloria Macapagal-Arroyo, and President Duterte based on the 36-page proposal for the new subject.

Arroyo declared martial law in the province of Maguindanao in December 2009, following the massacre of 58 people, including supporters and family of Esmael Mangudadatu, as well as journalists.

On May 23, 2017, Duterte placed the entire Mindanao under martial law, following the attack of ISIS-inspired Maute group in Marawi City.– With Helen Flores