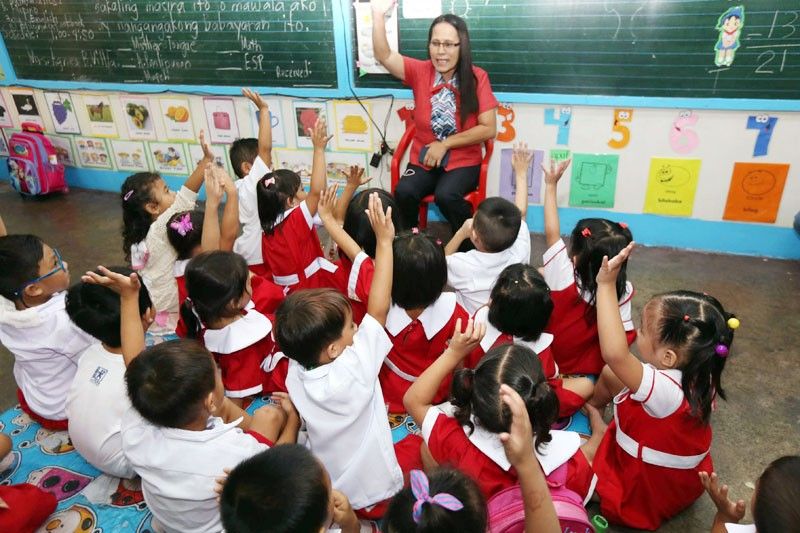 MANILA, Philippines — Public school teachers owe a combined debt of at least P319 billion, an increase of P18 billion in just over two years, according to the Department of Education (DepEd).

The figures provided by the DepEd include P157.4 billion owed by teachers to the Government Service Insurance System (GSIS) as of May 29 and P162 billion in outstanding loans to accredited private lenders as of June 6.

In October 2017, Education Secretary Leonor Briones said that at the end of the previous year, teachers owed a combined P301 billion, or P123 billion to the GSIS and P178 billion to private lenders.

But as the data accounted only for loans paid by the DepEd through automatic deductions from teachers’ monthly salaries, the P319 billion total could actually be much higher.

Loans from unaccredited lenders, who often charge exorbitant interest rates, are not paid by the department.

“These are the loan sharks, [to whom] teachers give their ATM cards as collateral,” said Alliance of Concerned Teachers (ACT) Rep. France Castro. “These are where teachers are flooded with debt.”

It is easier to acquire loans from unaccredited lenders, particularly for new teachers who do not yet have the payslips required by legitimate lenders.

But interest is often “5-6,” or 20 percent, significantly more than the maximum 7.5 percent allowed in accredited private lenders.

But even on its own, P319 billion is a daunting amount. With the allocations in the 2019 national budget, the government could fund the entire Philippine National Police, Philippine Army, Air Force and Navy but the combined expenses would still be less than the teachers’ debt.

In fact, only two agencies received more than P319 billion in this year’s budget — the DepEd and the Department of Public Works and Highways.

“For us, the increase in the total amount of loans is a reflection of how minuscule, and how insufficient, teachers’ take-home pay is for [their and their families’ needs],” Castro said.

Castro said earlier that up to 75 percent of the 800,000 public school teachers were in debt.

Education Undersecretary for Finance Annalyn Sevilla said the P34.4-billion increase in debt to the GSIS amid a decrease in outstanding loans to private lenders was “generally an effect of GFAL,” or the GSIS Financial Assistance Loan program that started in May 2018.

Under the program, a “debt-consolidation and balance transfer” system, teachers can borrow up to P500,000 from the state pension fund to pay off debt to accredited private lenders.

Their GSIS loans then become payable in monthly installments for six years at a reduced yearly interest rate of 6 percent.

In January, the GSIS said it had released nearly P13 billion to 36,692 teachers under the program.

Sevilla said the increase in outstanding loans to the GSIS was also due to the agency’s enhanced consolidated loan program, where all loans, except for emergency and policy loans, are combined into one loan payable up to 10 years.

The ACT, the government-accredited negotiating agent for teachers, has said the best solution to the perennial debt problem is a substantial increase in teachers’ salaries.

Entry-level teachers are paid P20,754, but this reduced to as low as P5,000 after outstanding loans and premiums are deducted.

The ACT has argued that teachers borrow to cover important expenses like housing and tuition.

Teachers who retire without paying off their loans use their pension to settle the balance.

In 2016, the DepEd said 26,000 teachers did not receive any retirement benefits because they needed to repay their loans.

“It can be seen that the problem of teachers drowning in debt is worsening,” said ACT secretary general Raymond Basilio.

The group has called for a base pay of P30,000 for entry-level teachers, who make up more than half of the country’s public school teaching force.